Charles John Huffan Dickens was born on this day two hundred years ago.

He grew up a “very small and not-over-particularly-taken-care-of boy.” His parents could only afford one child’s tuition and so they chose to send his sister Fanny to music school. Charles soon found himself twelve years old, his father in prison, his days spent working in a shoe-polish factory.

Way to pull through, Mr. Dickens. In your honor we’re pleased to republish your classic, “Night Walks,” as part of our forthcoming London series from Paravion Press.

The beloved Autumn Ahn has created a series of woodcut illustrations for the occasion. Have a taste, look forward to the London release in spring, a review and toast Mister Dickens. We at the shop would be honored to polish that man’s boot.
Sweet Dreams Charles. 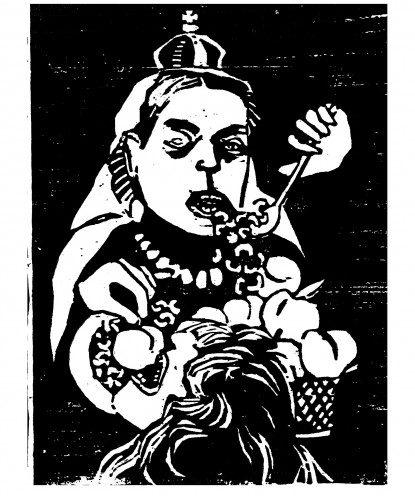 Said an afflicted man to me, when I was last in a hospital like this, “Sir, I can frequently fly.” I was half ashamed to reflect that so could I–by night. Said a woman to me on the same occasion, “Queen Victoria frequently comes to dine with me, and her Majesty and I dine off peaches and maccaroni in our nightgowns, and his Royal Highness the Prince Consort does us the honour to make a third on horseback in a Field-Marshal’s uniform.” Could I refrain from reddening with consciousness when I remembered the amazing royal parties I myself had given (at night), the unaccountable viands I had put on table, and my extraordinary manner of conducting myself on those distinguished occasions? I wonder that the great master who knew everything, when he called Sleep the death of each day’s life, did not call Dreams the insanity of each day’s sanity.